13.12.2019
Hotelstars Union celebrates its 10th anniversary as a successful example of bottom-up initiative across Europe

Exactly 10 years ago, an important milestone for uniform hotel stars in Europe was laid in Prague: The hotel associations from Austria, the Czech Republic, Germany, Hungary, the Netherlands, Sweden and Switzerland founded the Hotelstars Union (HSU) under the patronage of HOTREC - Hotels, Restaurants & Cafés in Europe. The common product of this association is a harmonised catalogue of criteria for hotel classification in order to offer more transparency and security for guests and hoteliers.

In addition to the seven founding countries, the HSU today also has Belgium, Denmark, Estonia, Greece, Latvia, Liechtenstein, Lithuania, Luxembourg, Slovenia and Malta as members. “The Hotelstars Union is a very good example of a successful bottom-up sector initiative. Its broad application throughout Europe offers guests from all over the world a clear comparison of the accommodation offer in Europe. We now have a total of 22,000 classified hotels or over 1,2 million classified rooms in our member countries,” states the current HSU President Jens Zimmer Christensen. Besides the 17 HSU members, eight countries have currently observer status: Azerbaijan, France, Georgia, Ireland, Italy, Poland, Slovakia and Spain. These countries do not have the right to vote, but can follow the HSU meetings to get to know the system and its objectives. With France, Italy and Spain, HSU has very important partners on board who play an integral role in tourism in Europe and worldwide. Azerbaijan and Georgia are examples of how attractive the harmonised classification system is even beyond EU borders.

The European institutions have also recognised the importance of the HSU classification system for the competitiveness and development of European tourism. In its "Resolution of 29 October 2015 on new challenges and concepts for the promotion of tourism in Europe", the European Parliament calls on the Commission and the Member States to further promote the Hotelstars Union initiative thus allowing a better comparison of the accommodation offer in Europe and contributing to common service quality criteria. This support is of immense importance, as uniform European standards drawn up by public authorities would clearly not achieve the objective. Since the star categories are based on operational practice, the system scores with objectivity and reliability and offers orientation and high quality to the guest and hotelier. The internationally comparable criteria strengthen the reputation of the hotels.

Due to the many online booking and rating platforms, it is important to expand the HSU classification system throughout Europe. The Hotelstars Union already makes the official hotel stars available to large online platforms and navigation systems in order to strengthen communication for the companies. Raising awareness of booking and rating platforms, navigation systems and other data providers will continue to be an important part of the work in the future in order to communicate the official hotel stars on their platforms.
“Our top priority for the next 10 years must be to further strengthen and promote the HSU system as a European brand for transparent and reliable hotel classification. Because the HSU not only underpins the service quality of Europe as a travel destination. Above all, it strengthens our small family businesses in their international competition and performance," concludes Jens Zimmer Christensen.

Hotelstars Union (HSU)
Under the patronage of HOTREC – Hospitality Europe - the hotels associations of Austria, Belgium, Czech Republic, Denmark, Estonia, Germany, Greece, Hungary, Latvia, Liechtenstein, Lithuania, Luxembourg, Malta, the Netherlands, Slovenia, Sweden and Switzerland form the Hotelstars Union, that established in 2009. The Hotelstars Union is based on a common criteria catalogue for hotel classification to provide the guests and hoteliers with transparency and security. For detailed information please visit www.hotelstars.eu. 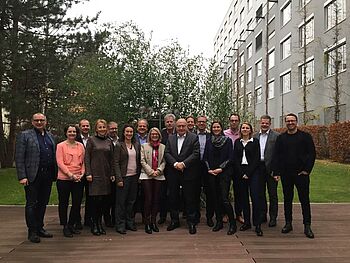