(Berlin, 29 April 2022) Approximately 13 years after its foundation, the Hotelstars Union AISBL returned to its birthplace Prague on the occasion of its 3rd General Assembly. In the Czech capital, the foundation stone for uniform hotel stars in Europe was laid in 2009. This week‘s meeting was about an update on the current situation and setting the course for future marketing. From now on, the Hotelstars Union (HSU) will increasingly promote the common hotel classification with the innovative video format „Starstalk“, mainly via social media, and with free online test classifications throughout Europe.

„In view of the current challenges for tourism and the hospitality industry in Europe, it is more important than ever to join forces, use synergies and create perspectives,“ explains Markus Luthe, President of the Hotelstars Union, referring to the success story of the HSU. Under the auspices of HOTREC Hospitality Europe, the hotel associations from Germany, the Netherlands, Austria, Sweden, Switzerland, the Czech Republic and Hungary formally founded the Hotelstars Union in 2009. The initiative quickly gained momentum and today counts 18 member countries and is an international non-profit organisation under Belgian law. „The Hotelstars Union is the example of a successful European ‚bottom-up‘ initiative in Europe,“ says Luthe. Especially in the age of digital booking options, the Hotelstars brand is also gaining in importance.

As the latest marketing tool, the „Starstalk“ developed by the German Hotel Classification was presented using the example of the current, fourth interview in the series with Philipp Ibrahim, General Manager of The Student Hotel in Berlin. „By internationalising it with, for example, English subtitles, the innovative interview series from Germany will be available to all member countries in the future,“ reported the HSU President. These could fall back on a well-rehearsed team and the experience from seven Starstalk series already filmed and thus produce their own attractive image films from their member companies easily and efficiently in a „copy-and-paste“ process. „With our Starstalk format, we want to brush up hoteliers‘ appetite for hotel classification as a contemporary, attractive marketing tool and show thathotel classification with its constantly evolving criteria is explicitly also open to modern hotels with unusual concepts“.

In order to make it easier for hotels that have not been classified so far to enter the classification process, the test classification tool was also made available to all HSU member countries. On the website hotelstars.eu, interested establishments have a free and simple entry possibility to deal with the 247 criteria of the classification catalogue and to try out how many stars they would achieve. „We are pleased to be able to provide all 18 member countries with an effective and free tool to further establish hotel classification,“ says Markus Luthe.

Hotelstars Union (HSU) Under the patronage of HOTREC Hospitality Europe the hotel associations of Austria, Azerbaijan, Belgium, Czech Republic, Denmark, Estonia, Georgia, Germany, Greece, Hungary, Latvia, Liechtenstein, Lithuania, Luxembourg, Malta, the Netherlands, Slovenia, Sweden and Switzerland form the Hotelstars Union, founded in 2009 and incorporated as AISBL in 2021. The Hotelstars Union is based on a common criteria catalogue for hotel classification and, with over 22,000 classified hotels or 1.2 million classified rooms in its member countries, offers transparency, quality and security for guests and hoteliers. For detailed information please visit 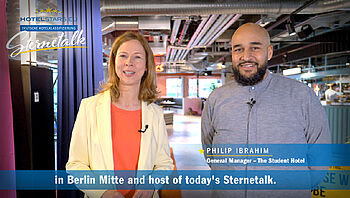