Stockholm, 14 October 2022: Poland becomes the 20th member of the Hotelstars Union and gives the starting signal for …[more]

July 15, 2022, Brussels, Belgium – As clear as the stars: Tripadvisor, the largest travel guidance platform in the world, will display the official star ratings …[more]

The Hotelstars Union reaches next level

The success story of the Hotelstars Union (HSU), a platform of member countries striving for a harmonised hotel star rating, has taken another consistent step with the incorporation of an international non-profit organisation...[more]

With the new catalogue for hotel classification, the Hotelstars Union offers a modern and transparent star rating system for more than 22,000 classified hotels or 1.2 million rooms throughout Europe.[more] 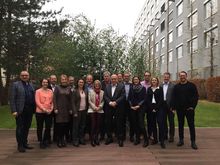